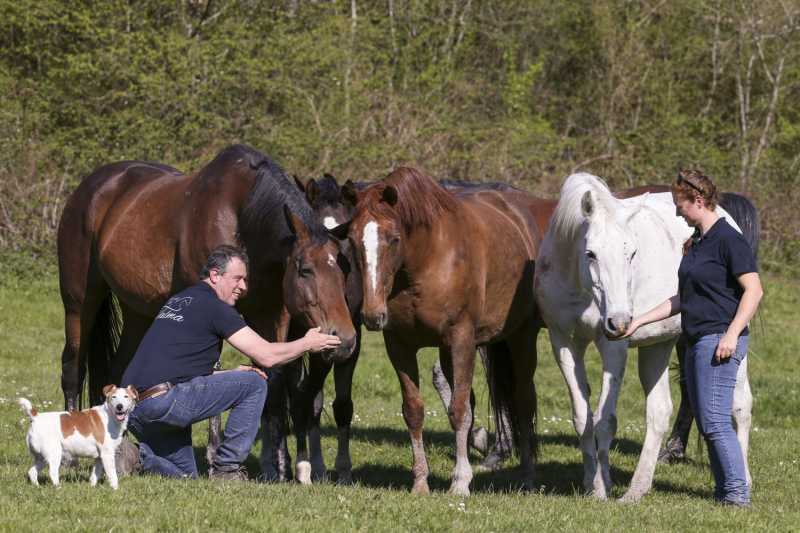 The Talma Stud is, first and foremost, a family story. As soon as we settled in the Ardennes, my wife and I, both passionate about horses, bought our first mare, BARCOLE DE SIVRY. One mare... to wander in the surrounding woods! It quickly became clear to me that this mare would bring me more than simply the pleasure of watching her canter across the fields!
Already close to a few breeders, I was passionate about genetics and the know-how and expertise of these mentors. For more than 20 years, I spent all my free time with Daniel Léger (Stud du Moulin) and Roger Douillet (former president of the Breeders Association). Sitting together in the stands of Fontainebleau, watching some of the best young horses, I learned so much about French bloodlines and their strengths and weaknesses. Alongside this, Robert Nivoix (from whom we bought our first mare) helped me judge a horse and sharpened my eye. At first sight, he was able to know how a horse would jump by its conformation. With my passion growing, I decided to send my mare to Hervé Francart to produce her for sport. Friends ever since, he has been (and still is) a precious help thanks not only to his experience in showjumping but especially in the equine business.
The foundations of my breeding endeavour were laid. We then began to build the rest around the values dear to me; produce blood-type horses, flexible with good conformation and most of all, intelligence. I wanted to breed modern sport horses, fast and agile.
For several years, together with my family and parallel to our professional careers, we bred five or six foals per year. This was mentally and physically exhausting and tough in terms of reaching the profitability and stability I was aiming for with our breeding programme. And so we moved up a gear and sought more autonomy in terms of the significant breeding expenditures; veterinary costs, agriculture, valuation and covering fees. We have since developed our own insemination centre and our production stables. Gradually, my stallion management company also joined forces with that of my friend, Denis Hubert, and we created France Etalons.
Throughout, we continued to search for broodmares bred from excellent motherlines. Unlike some breeders, we didn’t want to create our own damline from one unique mare. On the contrary, we chose to select mares with an excellent pedigree which we tried to marry with the best stallions, retain the best fillies, and keep on working our bloodlines like that with subsequent generations. Our way of working gave us the chance to resurrect some bloodlines, such as COR DE LA BRYERE’s damline, thanks to REGGAE DE TALMA.
Today, 25 to 30 foals are born on our stud farm each year, and we are proud to list several international performers worldwide performing under the name «de Talma»!